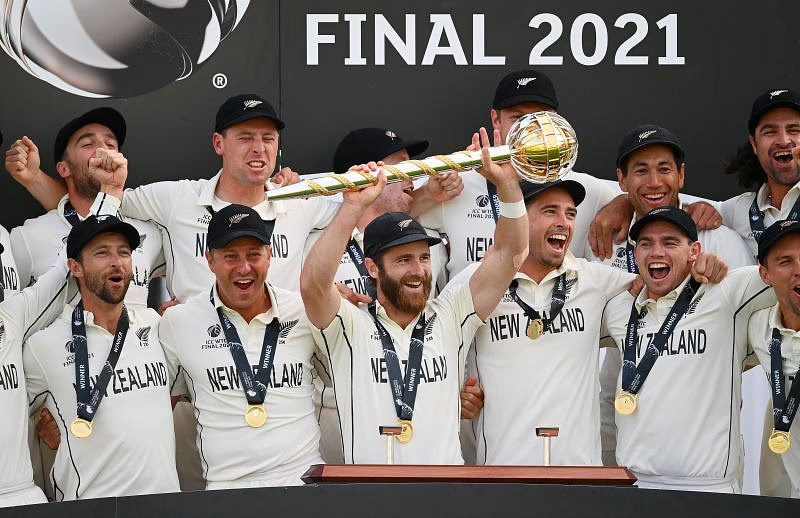 New Zealand won the World Test Championship final by an 8-wicket margin over India, giving them their first major ICC trophy since 2000-01. The Kiwis won after bundling India out for 170 in the second innings, with all three outcomes possible heading into the reserve day.

Kyle Jamieson followed up his five-for-five performance in the first inning with another outstanding performance at the plate. In the first session of play on Day 6, the towering fast bowler took the important wickets of Virat Kohli and Cheteshwar Pujara, setting the tone for a New Zealand victory.

Rishabh Pant top-scored for India in the second innings with 41 runs, but he perished as he attempted to boost the ante as wickets fell all around him. India could only set a target of 139 points in the end.

With his double punches, Ravichandran Ashwin gave India some hope by dismissing both of the Kiwi openers. Kane Williamson (52*) and Ross Taylor (47*) saw the game out for the Kiwis without any major snags in the finish.

The Blackcaps were able to defeat India in the WTC Final because of their outstanding fielding. During the first innings of the game, Tom Latham alone saved more than 30 runs with his fielding. The New Zealand batsman also made several outstanding catches.

In the second innings, Henry Nicholls took a superb catch to dismiss the well-set Rishabh Pant. The New Zealand players impressed with their fielding on several occasions throughout the WTC Final.