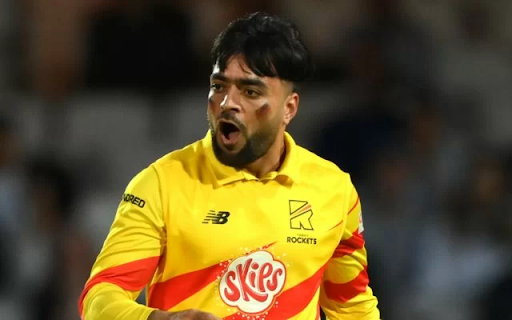 Rashid Khan, the Afghanistan spinner, has had a difficult time in the United Kingdom. Despite his appearance in The Hundred for Trent Rockets, all of his attention was focused on the tragic events in Afghanistan. Following the withdrawal of US soldiers, the Taliban soon assumed control of the country, despite Rashid's continued calls for peace on his official Twitter account.

Rashid Khan had painted the Afghan flag on his face to show his affection for the country before the Trent Rockets took the field on Friday to defend a low total of 96 runs. Amid the political turbulence, he was concerned for his family and friends back home, and experts lauded him for performing admirably throughout the tournament.

Kevin Pietersen recently spoke with him and indicated that the leg-spinner is struggling and concerned about his family in Afghanistan. Rashid Khan failed to make an impression on the field, scoring only two runs off nine balls with the bat and then conceding 26 runs in 15 balls without picking up a wicket.

Meanwhile, the encounter between Trent Rockets and Southern Brave in the eliminator was critical. However, the Rockets' star-studded top three — Dawid Malan, Alex Hales, and D'Arcy Short – could not score runs, leaving the club in a 31/4 deficit. They could never recover from the early setbacks and were eventually bowled out for just 96 runs, despite having batted their entire quota of 100 balls.

In response, the Rockets were blown away by Paul Stirling (31) and James Vince (45*). With seven wickets in hand, the Brave knocked down the meagre total in just 68 balls. The Birmingham Phoenix, led by Moeen Ali, will face the Southern Brave in the final of The Hundred on Saturday (August 21). Meanwhile, it's unclear whether Rashid Khan would reach Afghanistan following the Taliban's takeover.