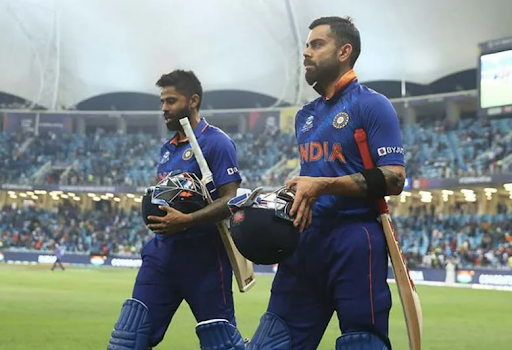 India was knocked out of the T20 World Cup on Sunday when New Zealand defeated Afghanistan to earn the second semi-final ticket from Group 2.

The Men in Blue entered the competition as hot contenders they let their future rest on other teams, after a heavy defeat to rivals Pakistan, who became the first squad to reach the final four, and then the Black Caps. India hammered Afghanistan and Scotland, but it was too late, as they are already out of the competition ahead of their final match against Namibia. Let us examine the five aspects of India's strategy that did not work.

Sequence of batting
Kohli and Rohit Sharma, two of India's most famous batsmen, were attacked early on by superb Pakistan bowling and subsequently by New Zealand quicks.

In both encounters, India was asked to bat first and experienced a top-order collapse, losing by 10 wickets and eight wickets, correspondingly, to put their quest on hold. The Men in Blue were already at the vulnerability of net run rate and other opponents by the time Rohit hit form with his 47-ball 74 in India's 210-2 victory over Afghanistan.

Dew factor
In the first two games, the Indian bowlers only managed two wickets, with Jasprit Bumrah scoring twice in what appeared to be a simple pursuit for New Zealand.

Dew was a huge factor in all the evening contests in Dubai, but going wicketless against Pakistan harmed the team with a lot of bowling quality, especially Mohammed Shami, the pace ace.

As concerns of bubble fatigue spread, a competition that was intended to provide knowledge and a good tune-up ahead of T20's showcase tournament appears to have backfired. A little break between the IPL and the World Cup, according to Coach Arun, might have been beneficial to the fast bowlers. He added that travelling for 6 months is quite challenging and the effect has taken its toll.

Unclear directions
MS Dhoni, India's former captain, has been appointed as the premier event's mentor, bringing his insight from leading Chennai Super Kings to their fourth IPL triumph in Dubai. Dhoni has previously guided India to the T20 World Cup championship in 2007, as well as the 50-over trophy in 2011.

Captain’s farewell
Kohli had stated that the T20 World Cup would be his final tournament as captain in the shortest format, and many speculated that India winning the tournament would be a fitting send-off for the famous batter. In 2017, he took over as India's captaincy across all formats from MS Dhoni, and he has since guided the team to greater levels in Test and white-ball cricket. Unfortunately, the captain has not won a world championship.